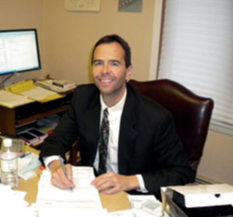 Over thirty years ago, I joined the Cooke & Steffan law firm. In my time serving the community of Alden, it has been my goal to put integrity and quality work above all else. When working with a client, my approach is always to listen first to their concerns, wishes and expectations. After understanding my client's intentions, I can then provide the personalized service that he or she deserves. No matter the task, I hold myself and my staff to the highest expectation of excellence, and will accept nothing less. When you trust our law firm to provide you with service and guidance, whether a simple matter or complex legal issue, you can depend on us to see it through to the end.
A Brief History of Cooke & Steffan

The law firm had its birth in 1939 under the name Cooke, Cooke, and Cooke. Edmund Cooke started the firm after having practiced law alone since 1910. He partnered with his sons, John and Richard, who began a journey in the guidance of a man who truly lived the American dream at the turn of the Twentieth Century. Edmund later retired, and John and Richard found their way into political service, as Mr. John Cooke became a Judge with the New York State Court of Claims and Richard Cooke served as a New York State Senator.

Richard T. Cooke's long time aide at the New York State Senate in Albany, Edwin F. Steffan, agreed to join the law practice as a partner in the mid 1970's, and immediately began the dutiful and honorable calling to service of the legal needs of local residents.

Meanwhile, Mr. Cooke was serving on the Erie County Fair Board and acting as a director on the Board of the Alden State Bank; all the while practicing law at the firm.

Mr. Edwin Steffan also had a calling to public service, as previously noted, and continued that role by serving a term as the Supervisor of the Town of Alden in the 1980s.

In 1986, nearing retirement and in need of an assistant for his busy law practice, Mr. Steffan looked to his nephew, Thomas A. Steffan for help. The 26-year-old Thomas was a recent graduate of Albany Law School. In September of that year he began his service at the Cooke & Steffan firm as a partner with Edwin. Both Steffans agreed to keep the name Cooke in the firm heading to honor the many years of service given by John and Richard Cooke in building the business.

Edwin Steffan retired in 1992, and Thomas has served as the sole proprietor and owner of the law firm since that time.

In his many years of ownership, Thomas has seen the business grow and prosper. During this time, Thomas has personally represented individuals, banks, and businesses, assisted local volunteer civil groups, served as Town Prosecutor, and has volunteered as defense representation. In addition, he now participates in the Volunteer Lawyer Project, which provides law services to those who cannot otherwise afford a lawyer. He has a balanced view of the law and its role in society due to his many years of private practice. His motto, and the firm's focus is simply stated "We are lawyers, we serve." The firm now represents hundreds of clients from the Alden State Bank to the Zientek Estate.

Cooke & Steffan continues to preserve the tradition of quality service to individuals and small business entities, to provide pro bono work for those who cannot afford to pay an attorney, and to seek out new areas of need for legal services.
Organizations